Shared from "TCEQ" Texas Commission on Eviromental Quality at https://www.tceq.texas.gov/drinkingwater/cross-connection

How Cross Connection and Backflow Can Lead to Contaminated Water

It really happened in Texas:

Luckily, this is where it stopped: The worker mixing the pesticide realized the danger and alerted the utility workers, who closed the flush valve before the contamination reached the city’s distribution line. Still, good water and time were wasted:

As shown by the case histories of backflow incidents

maintained by the backflow-prevention education program of the University of Florida’s TREEO Center, not all cases of cross connection and backflow end so smoothly.

Your Role as a Water Customer

By taking steps to control cross connections and prevent the possibility of backflow at your home, you will help to protect the public water supply and ensure that your family continues to enjoy safe drinking water. Garden hoses and irrigation systems are common concerns, but there are other common residential sources of cross connections, too.

No doubt you can think of other examples. In each of these cases, if backflow happens, your household’s water lines could be contaminated. Depending on how long the backflow event lasts, the contamination could spread to the public drinking water system. Fortunately, there are two inexpensive ways to solve this problem:

As a homeowner, you may install and maintain your own irrigation system, but it’s still important to have a suitable backflow prevention assembly (BPA) in place and to be sure that it works properly. Here are a few ways you can do just that:

The health and safety of our customers and employees is a top priority of the Mustang Valley WSC board and management.  Below are a list of resources where you can find factual information on...

When temperatures are consistently at or below freezing:

How Cross Connection and Backflow Can Lead to Contaminated Water

It really happened in Texas:

This rehab project will be simple and you may not even notice it; however, the staff wants you to know that we continue to work diligently to provide you the best water possible. In late April the...

Tank 1 is getting a facelift! Preparation work is already underway with the installation of a temporary tank. No service interruption is expected while the tank is being refurbished, and in...

"By failing to prepare you are preparing to fail."
Benjamin Franklin

I've done it and you probably have, too. No, this is not a compliment. Instead, it is admonishment born of an all too recent...

While nationally the water-borne illnesses have been trending upward, Michigan has seen a nearly 30% increase in legionella from last year.

The 2018 Annual Meeting will be held at the Cranfills Gap Community Center on Monday, April 16. Members will have the opportunity to vote on two board... 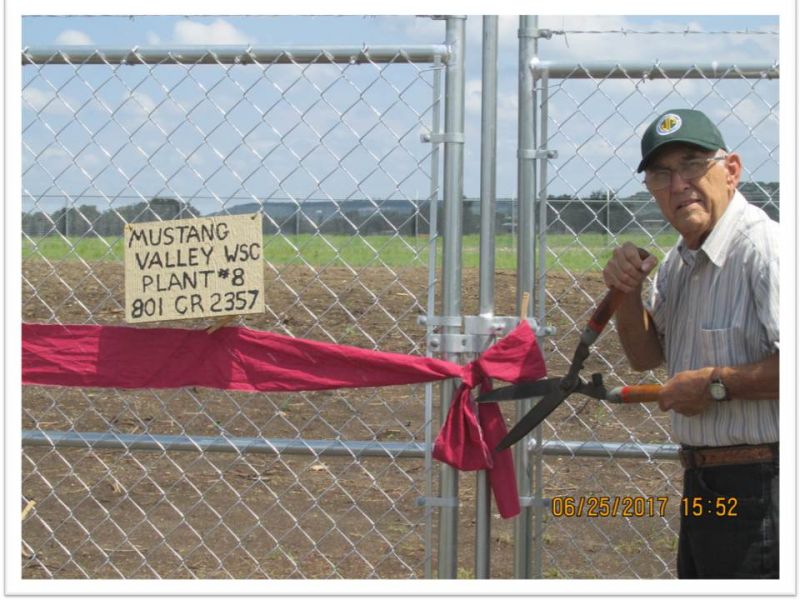 MVWSC has been working diligently on a big project over in the Meridian area. This new 1 acre site will boost the pressure for members being serviced by Well 2 northwest of the town.

PRESSURE: Take a Peek into the Mustang Valley Water System

Mustang Valley Water’s distribution system is a gravity system. The water is pumped from underground to a tower/tank. When a customer turns on the tap, earth’s gravity causes the water to flow...

The Water Lady Has Left the Building

Cranfills Gap and Mustang may be small communities, but they are home to an icon as well-known as Fort Worth. Ruth Tucker has retired after 41 years of service to Mustang Valley Water and to her... 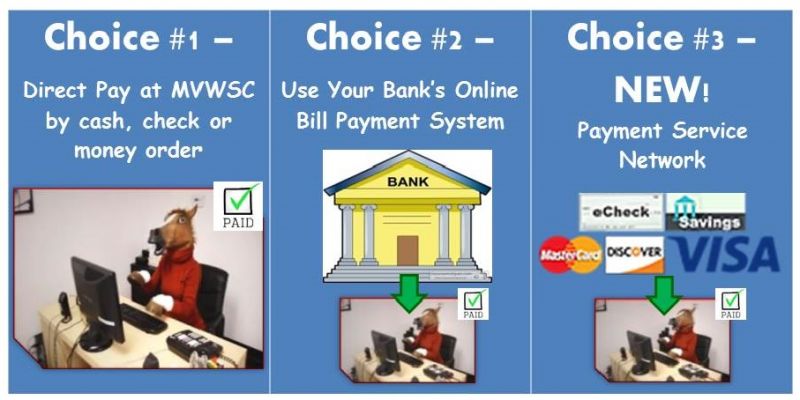 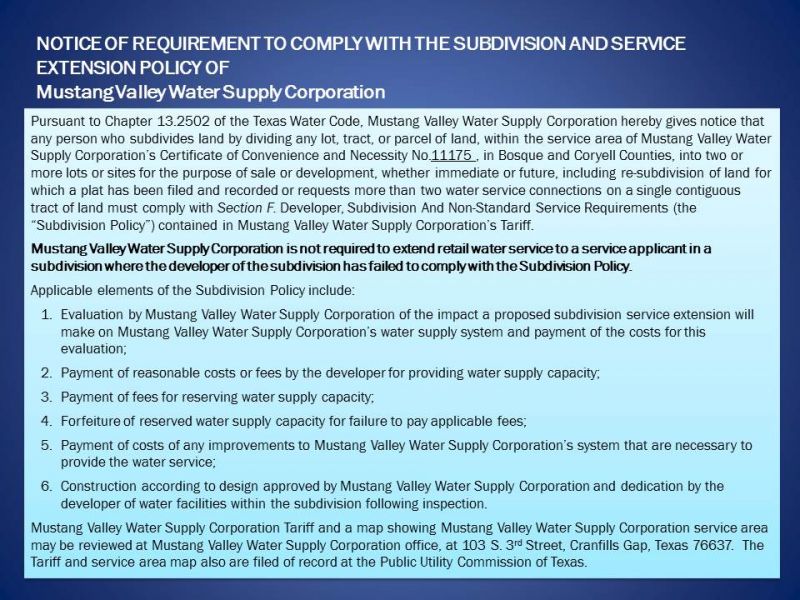 After 41 years of caring for Mustang Valley Water’s members and staff, the Queen of The Gap is retiring. Frankly, we don’t understand it; she’s only 83 years young!

WE ARE COMING TOGETHER to...

Cranfills Gap and Mustang may be small communities, but they are home to an icon the size of Fort Worth, who was recently honored for her 40 years of service to Mustang Valley...

Ruth Tucker and the 2015 Board of Directors 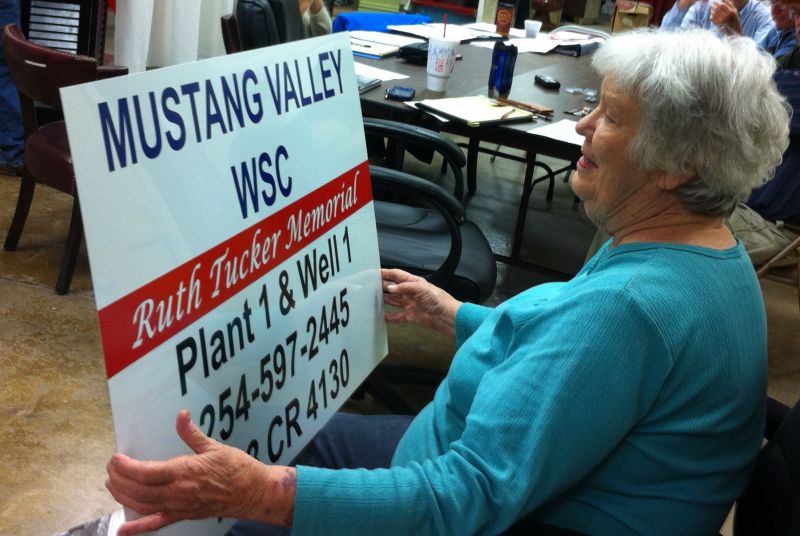 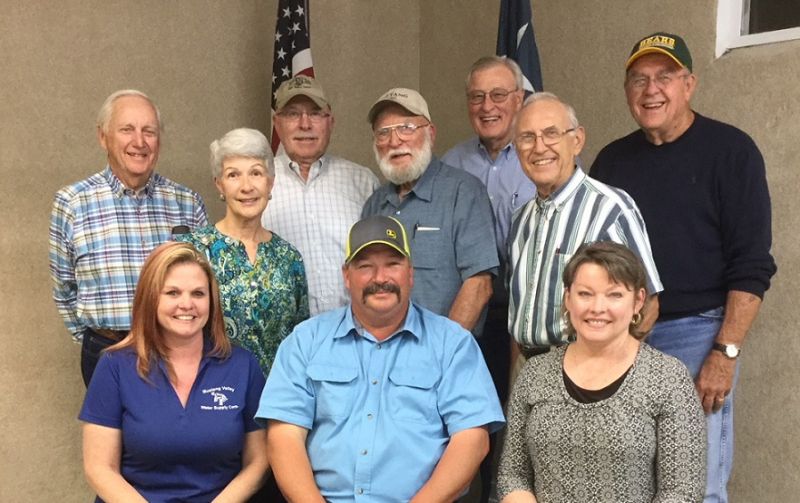 2019 Board Members and Staff

We are excited to announce that our new website has launched and includes all the information our community needs related to their water service.  Check back often, as we will be adding...

Ruth Tucker and the 2015 Board of Directors